Founded in 1714, sixty-two years before the signing of the Declaration of Independence, Abington Presbyterian Church is the third oldest Presbyterian church in Montgomery County. Benjamin Franklin was still a child and George Washington, Thomas Jefferson and John Adams had not yet been born when seventy hearty pioneers banded together in a primitive settlement to unite in the worship of God.

For their leader and pastor they selected one of their number, Rev. Malachi Jones, then 63 years of age. It was in his home on the east side of York Road that 70 people adopted and signed these words of Covenant

“In the Township of Abington, year 1714, we whose names are underwritten have engaged ourselves to be Ye Lord’s, and do hereby engage ourselves to Ye Lord and to one another to unite in a Church-State according to rule God gave in His word to direct His church in all the duty required toward God, ourselves and toward all men. The Lord please to aid and direct us.”

This small congregation held its services in the home of Malachi Jones until 1719 when Mr. Jones sold to the trustees one half acre of his farm “to build a House for the Publick Worship of God And also a place for Burying the Dead.” Work on the church building began at once. It is believed that this first church was built of logs because of the desire to build quickly. We do know the church was located in the center of the Burying Ground – the Abington Cemetery that we know today.

Malachi Jones served the church for 15 years and it was well established by the time of his death in 1729.

When the Rev. Richard Treat was installed as the second pastor in 1731, the ordination sermon preached by the fiery Welsh preacher, David Evans, was published by Benjamin Franklin. The ministry of Richard Treat was to last 47 years, the longest pastorate in the history of Abington Presbyterian Church.

These were eventful years not only for Abington Church, but also for the emerging nation. This was the chaotic period of the French and Indian War and the American Revolution, both of which took their toll on the country and on Abington’s people.

In 1756, when the Church was struggling for survival, 100 acres of land on the west side of York Road was donated to the church. This was used as a church farm, rental fees from which helped support the church for the next hundred years.

On this newly acquired land was built the first manse which was to serve Abington pastors until its sale with the church farm in 1856. Although there have been several renovations, the original manse still stands. It is the large stone house at the corner of York and Orchard Roads.

During the days when Philadelphia was occupied by the British, the American Army marched through Abington several times and part of the Army was stationed here. British soldiers camped in Philadelphia made frequent raids into the country. On at least one such occasion, the British marched up York Road toward Abington only to be repulsed by American soldiers entrenched behind the wall of Abington Cemetery.

In 1785, two years before the Constitution of the United States was adopted, the Church procured a Charter from the new State of Pennsylvania, incorporating “the Presbyterian congregation in Abington Township in the County of Montgomery.” This charter is one of the oldest documents of its kind in the State of Pennsylvania.

By the time the war hostilities ended, the devastation of the Revolution and the widespread poverty and distress had so depleted both the membership and revenue of the church that it was practically disorganized.

New life was breathed into the church, however, under the dynamic leadership of Rev. William Tennent accompanied by the national surge of reconstruction after the war. It was time for a new church, this time on the west side of York Road. The old building in the cemetery was dismantled and nothing of it exists today.

This new church, built in 1793, was to stand for forty years until the now thriving congregation required an even larger building. When the church was rebuilt in 1833, the unbelievably low cost of $1,893.36 indicates that it was built with the stones of the older 1793 church. It was “a very homely old church solidly built but devoid of architectural beauty.” Services began in the morning and lasted until 2 pm.

In 1856 most of the church farm was sold form $19,000. With $4,500 of this money the Church purchased 13 acres along Susquehanna Road, including Isaiah Hubb’s house on the corner. A manse was built between the Church and the Corner House, near where the church parking lot is today.

When Abington’s fifth pastor died in 1862, he was buried near the pastors who had preceded him. So it was that the first five pastors who served this church for a total of 148 years, all died in its service and are buried side by side in Abington Church Cemetery.

During the years of the Civil War, pastors in the North found it difficult to hold their congregations together because many families had sympathies with the South. It is to the credit of both the pastors and the Church that not one family was lost during this time. In fact, many members continued to join.

Near the end of the Civil War, the Philadelphia merchant, John Wanamaker, purchased a home in Jenkintown and became active in the spiritual life of the community. It was he who brought to Abington some of its more distinguished visitors, among them evangelist Dwight L. Moody and U.S. President Benjamin Harrison.

The closing years of the nineteenth century brought many changes to the old village of Abington. New streets, houses and schools were built, and a trolley route ran from Philadelphia to Willow Grove. Surrounded by this growth, Abington Church met the need for more space by expanding the Sunday School rooms, adding a kitchen and installing a new pipe organ. Then disaster struck.

At 3 o’clock in the morning of October 6, 1895, a motorman making a night run on the York Road trolley into Philadelphia saw the red glow of fire. Seeing the new Sunday School addition in flames, he awakened the pastor. Despite the heroic efforts of Rev. Henderson and Capt. Nicholas Baggs, who lived in the house on the corner, the flames finally reached the steeple. This well-known landmark crashed to the ground.

Within a year the church was rebuilt and John Wanamaker donated a new bell for the steeple. The bell hangs there to this day.

In contrast to the years of growth, the dawn of the Twentieth Century saw Abington Presbyterian Church in a period of inactivity and decline. The newly installed pastor rekindled enthusiasm, however, by launching the congregation into elaborate plans to celebrate the 200th Anniversary in 1914. As his contribution, Capt. Nicholas Baggs, a Civil War Veteran whose family lived in the Corner House for nearly 75 years, spent a decade unearthing, recording and publishing an historical record of the Church.

From this time forward, membership grew necessitating additions and alterations to the church buildings. In 1925 the Parish House was built. The Church was remodeled and enlarged; the chapel was added in 1939. In 1957 the Christian Education Building was added, and in 1959 the Sanctuary was enlarged to its present dimensions.

Abington Church is the mother church of ten Presbyterian churches in the area. Among them are Grace Church in Jenkintown, Carmel Church in Glenside, and Huntingdon Valley Presbyterian Church.

But Abington Presbyterian Church has not only grown physically. Its programs and ministries, both in the Church and in the greater Abington area, make “Old Abington Church” as much a force in the community today as it was in its early years. 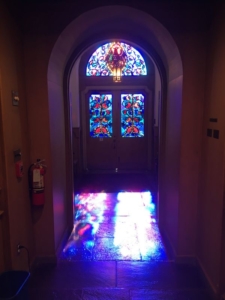 The Church has been through difficult periods causing some people to despair. Yet God has faithfully and repeatedly granted the church a rebirth. The Phoenix adorning the transom over the main entrance to the sanctuary symbolizes God’s faithfulness to Christ’s church in general and to Abington Presbyterian Church in particular. The Phoenix was a mythical bird of great beauty that lived in the Arabian wilderness. Periodically throughout its long life, it burned itself on a funeral pyre and rose from its own ashes, restored to all the freshness of youth to enter another cycle of life.

We do not believe in myths, but the story of the Phoenix serves as a reminder. Its resurrection symbolizes our faith in Christ’s resurrection victory over death, which He guarantees for all who believe in, trust in and rely on Him as their Savior and Lord. His resurrection also encourages the church, His people, to be faithful to Him in the community we serve to His glory.